Fabulously Frugal Friday—From Trash to Treasure All Over Again!

Home/DIY, For the Garden, For the Yard, Handy Hubby's Corner, Homesteading/Fabulously Frugal Friday—From Trash to Treasure All Over Again!
Previous Next

Fabulously Frugal Friday—From Trash to Treasure All Over Again!

Â Â  I have to tell you, dear readers, this whole Friday thing is starting to become my favorite part of the week! How about you? Are you finding a certain day of the week really appealing to you so far since we switched into doing themes for each day? Anything you would like to see more of?

Â I am always open to suggestions!

Â  It has been a busy week around here, what with the national holiday in the middle of the week, melting from the crazy heat, shuttling bunnies inside and out so as to keep them from having heat stroke, potty training two two-year olds who are incredibly stubborn, and still trying to take it easy recuperating from the bacterial pneumonia I have been fighting and overcoming for most of June.

Â Â  However, this week I am seriously excited about the newest pet project here at the Welcoming House. That Handy Hubby of mine is a genius. He comes up with the craziest ideas, and beneath that macho gruff exterior, I really think he loves to repurpose something and come up with a brand new beginning for old things. Things that other people would throw away, always wanting the latest and greatest.

Â Â  I wish I had taken a pic of this before he turned it into the new part of our garden, but for just over a year we have had the frame of our old swingset that was twisted and thrown across the yard from a terrible storm we had last year here in the prairies of MN. Straightline winds of over 80 mph, a giant cloud of dirt, pieces of trees, barns, etc over 40 feet tall…it came hurtling across the fields and through towns down here, flattening everything in its path. Farms lost entire groves of trees, equipment, animals that no one could find, etc.
Fortunately for us, we just lost our swingset and a lilac bush. Oh, and almost lost my father-in-law, who thought the safest place to be was his car until halfway through the storm when he tried to come in, but thats another story for another time.

Â Â  People thought we were crazy when we moved across town and brought this twisted, rusted wreck of a swingset with us, especially when we had a dumpster to throw it into. But the Handy Hubby had a plan, spawned off of the one he already had built at the old garden the previous Spring. Here is a pic of the old garden this Spring before cleaning and planting. See the frame in the back? That was our old dog kennel that was twisted and thrown about 400 feet into the neighbor’s field…or what was left of it. 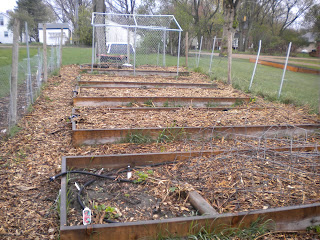 Â  And what did the Handy Hubby do? Turn it into a frame for vertical gardening. For free.
Â Â  SOOOOOOOOOOOOOO………..
Â Â  How many times have you seen swing sets advertised as “you come get it, take it for free”, or dis-assembled and dragged to the curb? Maybe we live in a weird part of America, but believe me, these type of things or something similar, is rather common, and you can have them for the labor it takes to break them down and bring them home. We are on our third swing set since having kids, and we havent paid a dime for a single one. And I am here to tell you, those things can be used for so many different ideas, they are sturdy, you can paint it with spray paint if you want, and I tell you what, they will keep right on going season after season with a little care and placement.
Â Â  So the Handy Hubby got out his tools, dragged it out from the place its been all winter next to the shed, and started hooking things up. Here are a few pics: 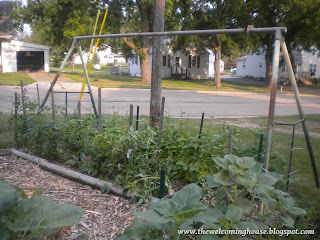 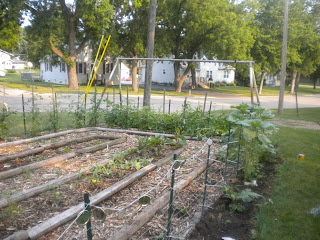 Â  Â I used the one at the old garden last year to grow Cherokee Tears Heirloom Black Beans up to see how well they would do. It was absolutely gorgeous because these lovely plants are prolific at both setting bean pods of 7-10 beans each, but also at exploding with beautiful deep purple flowers before the bean pods form. So if you can imagine that entire frame just covered with small purple blooms, you will know it was a showstopper for the garden, and edible beauty as well. This year I decided to grow my tomatoes up them, and move the black beans to the new garden in an attempt to enrich the new soil, and provide a natural screen since we have no fence up (yet). If you look at the first pic below—that was taken the day after we put up the chain link…the beans were already climbing merrily up it. And at the old garden some of those tomatoes are now taller than I am (at 5′ 3″), so I think they like the idea as well. Forget something flimsy like latticework or twine grids. If you have access to something like this, use it! 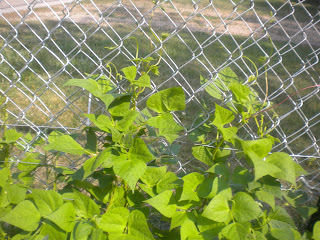 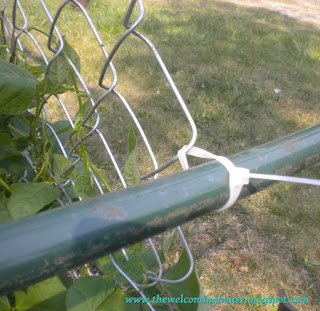 We had everything already in this pic right above, the swing set frame, the chain link that was scrounged from some other project. The Handy Hubby says that chain link is pretty cheap, and with the addition of zip ties, you have an instant large frame to grow anything up you can think of—cukes, some squashes, pole beans, hops, really even indeterminate tomatoes as long as you are careful to weave the plant in through the holes without breaking the stem off. And at the end of the season, you can either break the whole thing down, just take off the chain link by cutting zip ties, or just leave it up til next year! Your choice! I will most likely keep this one up year round as I have more than enough to do, and it doesn’t hurt anything to leave it up through the winter!

And you certainly dont have to use chain link if you don’t want, there are plenty of inexpensive alternatives out there as options, from a grid you tie yourself from twine or butcher’s twine, to a pre-formed, store bought pea fence, or even something as simple as chicken wire! Just use what you have or can get for cheap or free, and wait to see how the plants like it!
Here is a pic at the old garden of the same dog kennel frame with a simple butcher’s twine grid tied on it for my peas (which are obviously doing quite well, even with the heat we have had! yay!). 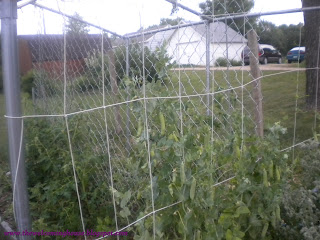 Â  Â  So there is this week’s Fabulously Frugal Makeover for your yard and garden. Hope you enjoyed it and it gave you some great ideas!!!Â Â  Be sure to check back Monday for a full meal plan for warm weather eating—3 breakfasts, 3 lunch ideas, 3 dinner ideas, and a couple desserts, all with recipes of links,and all for you!! I hope you are enjoying summer, and remember to keep praying for those folks still without electricity in this crazy weather!
Many Blessings to you and yours,
Heather 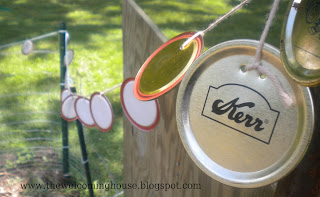