Home/Encourage Me, Faith, Strengthen Me/Grams is gonna be ok…………..
Previous Next

For those of you who have been praying, I wanted to give you a short update before I post today’s Tasty Tuesday article, because

1.the pictures are simply hilarious, andÂ

2. I know you have been praying for her and would like to know she is ok…

First of all, if any of you ever wonder why I try for humor Â in every situation (which has admittedly annoyed some friends and family members over the years),Â I give you proof that the apple does not fall far from the tree in our family.

When talking to my mother about her surgery this was her response:

I about spit my hospital coffee out when snapping the picture, because she did it at the last second after smiling so sweetly and “grandmotherly-ish”.

And then there was this one. 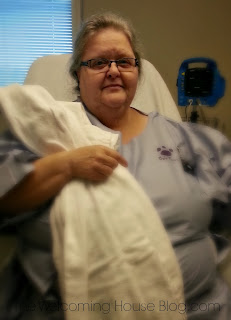 My sister and I called her Queen Caesar until she went back for surgery.

Yep. Hilarious. At least she is smiling and not making a funny face.

Anyhow, surgery went picture perfect, the surgeon was thrilled and very encouraging, and said it is rare that he has a surgery that goes this well without any complicationsÂ

and is done in just under an hour.

He was also very optimistic about her recovery time, saying that if she could be walking around for 6 years on that messed up of a knee then she would power through her rehab and recover and would be back home in two to three weeks at the very most.

And my mother is rather…..determined, so I believe him. 🙂

So thank you to everyone who prayed for her, and for the many who emailed me and told me they were praying. My mom says thank you and God bless you…

Now please continue to pray for a quick recovery and for her to pace herself.

Blessings to you and yours,Â