Make It yourself Monday—-The Pumpkin Invasion….

Home/Cook, Dinner, DIY, For the Garden, Homesteading, Lunch, Pressure Canning, Snacks or Sweets/Make It yourself Monday—-The Pumpkin Invasion….
Previous Next

Make It yourself Monday—-The Pumpkin Invasion….

OH what do you do with a thousand pumpkins? 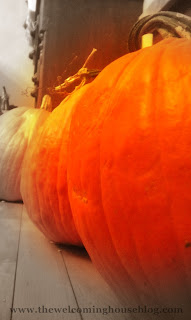 I canned pumpkins.
And chopped pumpkins.
And pureed pumpkins.
And peeled pumpkins.
and isnt it amazing how much this sounds like the song above?
Yeah.
Pretty much the same thing.
We havent blown any pumpkins up yet, but believe me, by the time we get towards the end of all of this bounty, I just might be tempted to atleast heave a few to the squirrels.
Still, I am incredibly thankful TODAY for pumpkins, for generous friends, and for a family that works together like a team to tackle this huge chore in our home.
We were blessed with not ten pumpkins, but 27, full sized, gorgeous, seed-filled pumpkins.
So all weekend, that is what I have been doing, is preserving pumpkins.
For many years I thought pumpkins were just for Halloween,
Jack-o-lanterns, decorations, etc.
But then a dear friend showed me that you dont have to throw them away, you can actually cook them down, and make some amazingly delicious things out of those pumpkins.
It is almost like free food.
And if you have friendly neighbors, they just might be willing to give you THEIR pumpkins
when they are done with them, which IS free food.
Now, dont do what I did the very first year, and think that because I had a waterbath canner, and was now an amazing *ahem* expert at canning, that you can can pumpkin like that.
It smells.
Horribly.
The lids fly off, and since they are on a shelf in your pantry, I kid you not, it smells like you killed the postman and stuffed him in there.
With blue cheese.
Or a dead racoon.
It is really really REALLY bad.
Pumpkin is low acid, so you need a pressure canner, but I am gonna show you how we canned up 40 Qts and 20 pints of pumpkin this weekend. Tomorrow I am going to show you how to freeze and then use the pumpkin that way. And sometime later this week, I am going to show you how to dehydrate the pumpkin pieces, then grind them up and use them as “pumpkin flour” in SO MANY recipes, that you will thank me from the bottom of your little heart and tell all your friends they just cant miss it. 🙂
Just wanted you to know what I am up to this week. 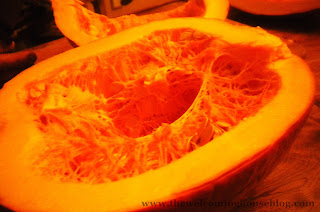 Pumpkin is hard to cut when not cooked, but if you have a strong hubby, son, or steady teen in the neighborhood that likes to help, hand them a knife and get started. I cut all my pumpkins in 8 pieces, and then cleared out the seeds. 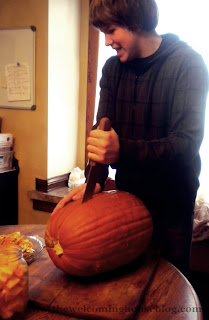 After that I cut them in slices, peeled the slices, cut into cubes, and packed into jars. 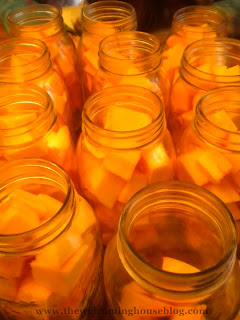 Fill the jars with boiling water, and cap with warm, clean lids and rings after wiping the top rims down with a clean cloth. 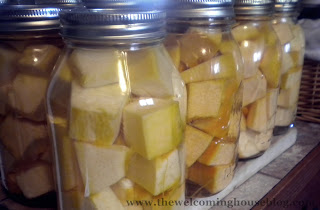 Process the pumpkin cubes in a pressure canner for 75 minutes for pints, and 90 minutes for quarts. 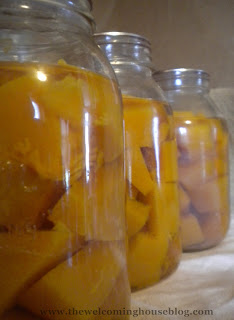 It is not recommended to can pumpkin puree because it is really dense, and you can not be sure that you will actually penetrate all the way to the middle with the pressure canner, or so the USDA/FDA says. I have done pumpkin butter, though, on my own, and set my times really high, including sugar as a preservative, and it was really good.

After we were done processing all the pumpkins we could do this weekend, we realized that for a standard medium pumpkin, we were getting about 10 quarts of pumpkin cubes. Since I have 22 pumpkins left, we realized we will most certainly need more jars than what I have–which is just crazy! I have been doing a lot of canning this year, but did not realize quite how much that was. 🙂
I think there is a good chance we will be doing more dehydrating pumpkin than canning anyhow. 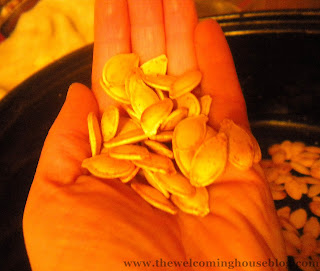 You can also take the seeds and make an amazing simple snack. I soak mine in salt water overnight, season with whatever seasoning I want (the first batch was onion and garlic salted, but I have a batch of mesquite BBQ in right now), and put into a greased turkey roaster in your oven. Have oven at 350* and stir those seeds about every ten minutes. Once they start to get brown and crunchy, you are done. Just take out and cool, then place in an airtight jar. I bet I will have over 3 gallons of pumpkin seeds for snacks when we are all done around here. 🙂

There are so so SO many things you can make with pumpkin. I will be linking quite a few tomorrow, and then again on Thursday.
Hope you have a wonderful Monday.
What are YOU thankful for today?
Remember, keep checking in over at theÂ Welcoming House FB Page to see the other updates we keep doing! We are over 700 members now! Wahooooo!!!!!
Many Blessings to you and yours, 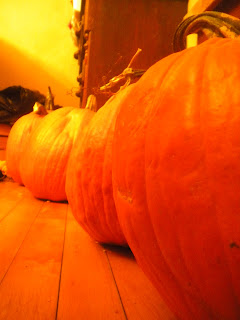