Marjoram, Oregano, and Fennel—Cook with them, Heal with them

Home/DIY, For the Garden, Growing Herbs, Heal, Herb Recipes, Herbal Medicine, Homesteading/Marjoram, Oregano, and Fennel—Cook with them, Heal with them
Previous Next

Marjoram, Oregano, and Fennel—Cook with them, Heal with them

Have you started to dabble outside the realm of what most people would consider normal items to garden with? I have to tell you about my experience today, and hopefully it will make you laugh. Either that, or I may check on tomorrow and find half of you have fled for more “normal” pastures–LOL!

Â  Â Today my husband and I were very excited to hear the city landfill was open. NO, I am not talking about a landfill full of trash, I am talking about where the city mulch and wood chip landfill is here in our small hometown. See, I already told you about how we had placed wood chips on part of the garden last fall, and how over the winter they had broken down into this gorgeous soil, right? I couldn’t stop running my hands through it the other day, and today was no different.
Anyhow, we went down there with Old Betsy–my handy hubby’s old truck, and filled the bed to the brim first with gorgeous mulch from last year’s leaf piles, and then again with more of those lovely wood chips. We are hoping to go each night this week and get a truck load to finish filling up the beds. I can’t tell you what fun it was to see the raised beds filling up again and knowing that with each load, will come more abundance in production in the garden!
Next door was this older guy thatching the lawn, who almost ran into a tree a couple times just watching us while he was running his machine. I was seriously waiting for him to get his foot, run over the neighbor’s rhubarb, or take out the heated bird bath she has. As to the last one, he came so close that I couldn’t wait and HAD to watch him run into it, so I stopped. I mean, the thing is hooked up to running water, and I tell you what if he had actually hit it, it would have been like a fire hydrant let loose, and there is NO way I am missing a show like that (or her coming out feisty mad and hitting him with the broom).

Nope.
We don’t get out much.

Â  Â But miss that heated water bath, he did, and then realizing we were staring at him, I guess he decided he had better just get his curiosity taken care of. SO he got off his machine and ambled over, leaned on the fence and said:
“Whatcha doing?”?
Seriously?
What do you think we are doing, fella? Digging to China? Landscaping? Spreading a ground cover for the Sioux powwow tomorrow night? Yes, all those things ran through my mind, but I just responded politely while my husband rolled his eyes. (He knew what I was thinking, betcha a million bucks…)
“Adding mulch and wood chips to our raised beds so we can garden and keep down the weeds.” Then I ducked my head and didn’t look at him for fear of some smart-alecky comment coming out on the heels of that one.
“Aintcha gonna till it up first?”
“Nope. These are no-till garden beds.”
“No Till? Ain’ never heard of that. You from ’round here?”
(I knew it was coming, I mean, we don’t exactly do things the way everyone else does around here, so it comes as no surprise this is a common comment)
“Nope. Been here about four years. From another small town before that.”
Then he cocked his head, peered at me from under his John Deere cap and said: “Whatcha growin’ in here? any of that weird stuff, like….what’s it called………kookarabbie or something like that?”

Â It was all I could do to keep a straight face.Â

I mean, all that smart-aleky part of me wanted to keep a straight face and tell him we were trying cannabis this year and launch into the medical benefits (which I would have to make up as I go since I know nothing about it other than that it is ILLEGAL) just to shock him enough he would leave us alone. *sigh* But I didn’t. I told him what we grew in each bed and how, and he just happily followed along, listening, nodding, and not even once falling over backwards when I showed him the bed we grew kohlrabi in.
The conversation was a long one as he followed us from bed to bed, asking questions. He finally wanted to know what the name of the movie was that we got “all our information from”, we told him, and he happily went back to his thatching machine shaking his head at the “weird gardening people who aint from here”.
I told him to come back in August when everything is at peak production and we are pulling tomatoes and such out of the garden by the wagon -load. Then he can shake his head, spit towards the shed and term us the “weird people who get a dang huge load of tomatoes out of that garden who aint from here.”
If you haven’t watched that movie I recommended yet, I would strongly encourage you to do so. The principles he shares are really not new ones, and boy, is it a lot easier to garden in this way than the typical way. We covered that gorgeous mulch I was running my hands through with another load today and within an hour the plants were already perking up, because they were not losing any moisture to the hot air.
Here is the movie link. Please watch it. It will revolutionize your way of thinking when it comes to gardening and making everything so much less effort: I bet you could even grow enormous…..kohlrabi.

Back To Eden
Â  Â Okay, today we are going to talk about three new herbs, ones you are most probably familiar with in cooking. Â We will start with the first two, because they have often been mistaken for one another, and you must be careful when purchasing plants to make sure you are getting the one you want! 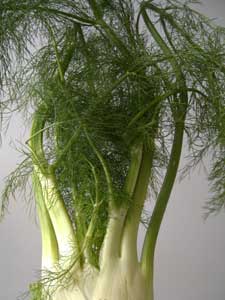 DONT try to grow fennel along with anything else.

I mean it.
It is not a good companion plant, and has both growth inhibitors and some sort of hatred for any other growing thing within its system, and will actually kill other plants you place it next to. Just consider it the Oscar the Grouch on steroids in the herb garden. The only plant that can actually stand and thrive with Fennel is Dill, and for some reason, fennel has no effect on it. I always grow my dill towards the back of the herb garden because it gets so tall and leggy, and I am going to try growing my fennel there this year as well, off in the corner, where it can be unsociable and rude all by itself, but not limited to a pot, or near the dog kennel. It supposedly repels fleas, so they say “grow fennel near your kennel”, but I have not seen this in effect so cant say if it works or not.

Â  Â Fennel, for all its unhappy issues with other plants, is definitely a great herb for nursing mothers, and all women in dealing with your menstrual cycles and issues. It is considered a natural help for augmenting breast size, and increased milk production, as well as regulating your monthly cycles, helping with PMS, and other womanly symptoms.
Â  Â But the best thing that fennel is known and used for is digestion issues, from babies to adults. Used extensively for colic, upset stomachs, bloating, and anything dealing with intestinal issues, fennel is unrivaled in its ability to quickly deal with the issues and get rid of them.
Â  Â It boosts the liver’s ability to work at getting rid of toxins, and also increased the kidney’s and bladder’s ability to rid the body of urine, and the waste it contains. It is also anti-bacterial, which means it can help the immune system overcome many different bacterias and yeasts that would affect the body in a unhealthy way.
Â  Â It balances the bacteria in your stomach and intestines by boosting the good stuff and eliminating the bad stuff, and as a tea, it tastes very good, actually.
Â  Â  All of this plant, from the bulb to the stalk to the seeds can be used. For tea, the seeds are best, for fresh eating, the bulb and stalks/leaves are best. The seeds lose their potency as they turn from green to grey, so be sure to keep a fresh stash each year and grow new plants from seeds. This plant is very prolific and has no problem taking over a spot in the garden, it is tall and often resembles dill in many ways, from its height to it’s look, so be sure if you DO plant them together you can tell the difference. Dill, of course, has a very characteristic smell, which sure helps, but it is rather confusing just using your eyes!
Â  Â  I hope you are enjoying the series and learning more about each one of these herbs. Have you found a new favorite so far? if so, please leave it in the comments. It makes my day to come on here and read what everyone had to say each evening! Only three more days until our gift certificate giveaway! Hope you are as excited as I am!
Â  Â  If you haven’t done so already, I hope you head over to the TheWelcomingHouse and join up with us over there! We have only three more members to go to hit 100 and then we will be having a giveaway over there as well! Hope to see you there!
Many blessings to you and yours, 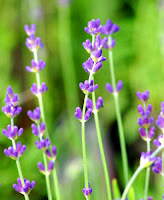 To learn how to make your own herbal oils Click below: