This Old House, A Bottle, and a new Front Porch….

Home/Encourage Me/This Old House, A Bottle, and a new Front Porch….
Previous Next

This Old House, A Bottle, and a new Front Porch….

One thing is for sure, owning a house that is over 100 years old means you are constantly working on projects and keeping it up. Ours is no different, and we would not have it any other way….we love the history and beauty of this old thing and take being home owners very seriously after all the years of renting and bouncing around.

The Welcoming House has been sadly neglected the last couple years as we lived in SD and tried to keep two homes running. Illness and life changes, including a work change, grabbed all our attention for a time, and the old house sat, waiting for us to come home. 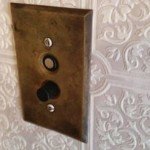 Walking through those doors again was one of the best feelings in my life. Plunking down bags and boxes and feeling that overwhelming peace that we were back where we needed to be…not many things better, for sure, in life, than that feeling.

Last month we realized to get through another winter we were going to need to bite the bullet and put on a new front porch. Since the Handy Hubby is in SD for most of the week, and we want his time spent with us, instead of doing projects, we hired a wonderful handyman to do the job.

But first, we had to get rid of the old step, and found some very interesting things while doing it. A sidenote first however, have you ever tried swinging a sledgehammer as a woman? Sheesh. Talk about a lot of work and praying when it lands you dont take out a window or something. Or if you hold it wrong it can travel with shock up your arm and sting your shoulder. Not that I would know any of that from experience or anything. *cough cough*

Gives you a whole different perspective on how hard some folks work at their daily jobs, for sure.

Anyhow, so we took over 2 hours to demolish the original solid block of cement on top, with 2 of us working hard at it. Who knew those blocks could be so darn tough to split or even dent in? Man, that feeling though, when you finally see it crack and realize you just smashed a cement block with sweat and tears. Once we got that finished and pulled off, we foundÂ  a treasure trove underneath. 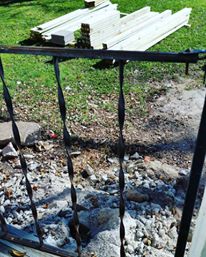 Turns out those steps, that had been there probably 70 years or more, had been put on top of even older steps, probably the originals to the home. Those original steps had been broken up, used as filler, as well as what we figured was the worker’s lunch imbedded into the remaining concrete. We found crazy awesome tins totally rusted but filled with original cement, a box that had totally rotted away but left its imprint on the block of concrete int he middle, and then finally, we pulled this out. 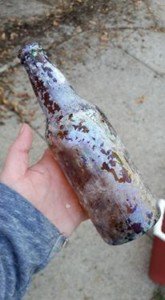 At first it was clear, crystal clear and we were reading the imprints on the glass, But within seconds it began oxidizing, and before long we had this beautiful bottle as our treasure from the steps….We plan on putting it into a shadow box with a few other treasures from the house restoration. Old wallpaper, pictures of handwriting that was buried from the original construction, etc.Â  It was a great history lesson for the littles who worked just as hard as the adults, carrying chunks of cement and stacking them for the workers to carry off to the landfill. 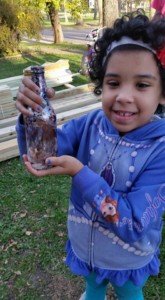 The step leading into the house also had writing underneath, from the original lumber yard that closed long long ago. It also had a date written of when the house was finished and established. We kept that as the step. Hoping it gets another 100 years out of it since it is a rock solid piece of wood even 100 years later. Just neat to see the history in a home and know it is preserved for time to come. 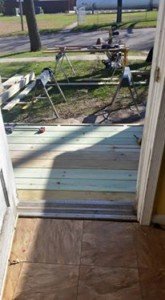 So what did we do when that porch went up finally, after storing our new treasures in a good spot where they will still be around for another 100 years?

Why enjoyed the beauty of a late fall day, of course, and set our pumpkins up there. 😀 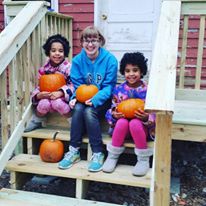 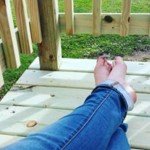