Home/Challenge Me, Encourage Me, Faith, Strengthen Me/“Swiper, No Swiping!!!” ~ A lesson from my children to you…
Previous Next

Strangely enough, after a crazy week with my twins almost sending me to the insane asylum with their antics, it is they who are inspiring me to come up with a simple way to explain how I am feeling about the election, the consequences therof, and the thoughts that I have struggled with all week. 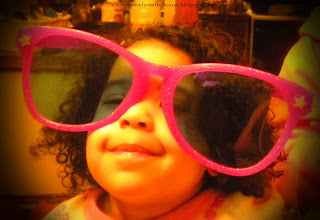 Before I get to that, let me tell you, my Littles had a field day with their mom’s sanity last week. It started on Wednesday morning with the two of them smearing an ENTIRE BOTTLE of Johnson and Johnson Baby Lotion all over their faces, eyes, hair and clothing, all in the space of about ten minutes when I THOUGHT they were watching Dora the Explorer.
When I did not hear the mandatory Â
“Swiper NO SWIPING!!!”
phrase that they love to yell,
I came off the chair where I was doing my devotions with the older kids, and found…
well, a horrible, horrible mess.
Wiped em up, washed their eyes out,
stared hopelessly at their beautiful curly mops of hair,
now sad, bedraggled and matted with lotion, and sent them to the shower.
Hours later, I hear a cry from upstairs,
like someone is in pain after naptime is over.
Â My adopted son got their first,
and he brought down the saddest sight I had ever seen.
One of my Littles had a terrible reaction to something in the lotion
(which we never put on them, by the way, this was an extra bottle).
I was horrified to see her eyes swollen in their sockets and lids swollen closed.
Trip to Urgent Care, everything on the schedule canceled, home again.
Night spent rocking a wheezy, sick baby
who had not opened her eyes again.
Next morning, things are worse, she is stumbling around the house with eyes swollen shut, and crying. Trip to a pediatric opthamologist.
Turns out her cornea in the left eye is torn and she is in great pain…
Â it will take days to heal.
Pack her up, go home,
spend a little time trying to love on my other Little and Big Kid.
Hours later, all of sudden, its quiet.
Tops two minutes.
Â If you have ever had a single toddler, let alone two at once, silence like that pushes most parents beyond any reasonable fear as they KNOW what two year olds are capable of in a very short time. Found them under the computer, eating or trying to eat, a bottle of Mentholatum, that was in the bathroom, SUPPOSEDLY on lockdown.
“Swiper, NO SWIPING!!!”

Poison control call,
head to the ER due to the Camphor in it,
as it can cause seizures while ingested,
and 3 1/2 hours later, home exhausted and wondering what next.
More happened, but you get the jist of it.
Now what does that have to do with how I feel about the election?
Lots.
Really.
Let me show you how I can link it.
We live in a nation that was FOUNDED on Christian principles. If you don’t believe that, then do some research. Head back and read the writings of the men who shaped up our constitution, who wrote the Bill of Rights, and signed the Declaration of Independence. Read their personal memoirs, diaries, letters to their wives and friends.
They sought a place where they could worship freely,
where the King could no longer tell them what they could
and could not do personally, morally, and physically.
Where what you worked for was yours and no one could take it from you.
Where everyone started at the same place, and what you made of it, was yours.
All of a sudden, we have become a country where almost half of the population can not, or will not, work, and the other half are seeing what they make go into a black hole while they themselves are struggling to feed their families.
I know because we are one.
And we are not alone.Â
Â
We work.
We work our tails off.
And we have creatively found ways to work around rising food and gas prices, insurance rates going through the roof, hours dropping or more work being required for the same amount of hours.
And yet, it seems like daily, we are told we shouldÂ
“go get assistance”.Â
That our “pride” is keeping us from receiving that which we have worked for.
I am sorry, but when does the balance of the scales tip?
When does there become more workers than those that receive the help and assistance?
What then?
Do we all just pack up and jump on those who are better off than we are in the hopes that they have enough money and enough food to go around and sustain our families?
“Swiper, NO SWIPING!!!”
Our nation made a choice this last week, to change from a state of independence to dependence on Government. But that only works so long as you have enough people paying into that system, to balance out those who are not able to, or choose not to.
And the consequences are already beginning to happen.
We have huge lists of company layoffs, with many more smaller companies halting hiring, cutting hours to less than 30 hours a week, or simply closing up shop. Remember, those lists are simply the tip of the iceberg–the greater amount are the names that no-one is going to know–the small home based businesses that have no choice but to limit their capabilities to hire and raise incomes.
Where will the jobs come from to bring the balance back down to the level it should be?
What happens if the military cuts that have been talked about are enacted and we have veterans coming off the armed forces payroll and into a jobless job market?
And then, you can see the impact it had not only on our stock market, but markets around the world. The entire world is watching to see what move we take next.
Will we actually deal with our deficit?
Or kick the can down the road another couple months
until we hit a brick wall?
How about the taxes meant to expire?
What about inflation?
Really folks, I could go on and on.
“Swiper, No SWIPING!!!”.
We are responsible for ourselves. Or we should be.Â
And we should have the right to keep what we earn, and help as we see fit, not have a government that tells us what we should and should not be doing with what we have worked for.
I really believe, though, that the church has failed in this issue.
We are supposed to be doing the job that the government has now taken on.
It is one of the mandates in Scripture,
and yet we have ignored it while sitting in padded chairs
and raising our hands in praise on Sunday mornings.
But there is one other thing that this week has me thinking about.
Just like when one of my children is silent for more than a few minutes
my red flags go off,
I have them going off all over the place at the deafening silence we have heard from our leaders on two issues.
Benghazi.
Fast and Furious.
I could name more. But I wont. You already know them.
Two of the key people who SHOULD be testifying are, for whatever reasons given to us, opting out.
Petraeus.
Hillary Clinton.
And as a nation, we have turned a blind eye, and deaf ear,
Â to the corruption that is visibly taking place before our eyes,
and choosing to ignore it.
Folks, I am pleading with you in saying this.
Do some research.
Â Find your own answers.
Keep a food storage.
Have an emergency aid kit on hand.
Learn to garden and preserve it.
Make friends with your neighbors
or find a group of people willing to barter.
Store water.
Become more self-sufficient.
Â How can you help yourself?
How can you help someone around you, right now, that is in need?and ultimately…
Â What is your dependence resting on right now?

I feel as Dora must feel when Swiper runs down, snatches something from her hand, and throws it as far away as it can go, causing her miles of roads to get it back again.Â

What we have ahead of us is a long road, and even more so if you call yourself a devoted believer of Christ. Right now, the average person doesn’t want to hear from us. They want to silence us, silence our pastors, tell us what parts of the Word of God we can read, and preach, and talk about…anything as long as it does not offend anyone.
Jesus offended wherever he went, not as a divisive way of speaking,
but because his words had the ability to pierce through everything a human can try to hide behind, and head straight for the heart of whomever he was speaking with.
Take courage, my friends.
Tighten your belts.
Look to the Word, and hold on tight.
“Let us fix our eyes on Jesus, the author and perfecter of our faith, who for the joy set before Him endured the cross, scorning its shame, and sat down at the right hand of the throne of God”
Â (Hebrews 12:2)
“For the message of the cross is foolishness to those who are perishing, but to us who are being saved, it is the power of God”
(1 Corinthians 1:18)
“All men will hate you because of me, but he who stands firm to the end will be saved.”
(Mark 13:13)
Those are some precious promises, and encouragement in the midst of the persecution we are beginning to see spreading across our nation, and will see much more of the next few years. Christians, and the people similar to the founders of this great nation, have now officially become the minority…and dark days lie ahead,
because without that great drive to pull together to succeed,
to face all obstacles as one, instead of snapping one at another,
instead of turning to the Lord for leading and guidance,Â
we will fall apart.Â
Just like every other great nation in history has.
Pray for the President.
Pray for our leaders.
Render unto Caesar what is due to Him,Â
and give to God everything else; heart, soul, and mind.
Many Blessings to you and yours
Heather
By Heather Estey|2020-09-10T01:30:50-05:00November 12th, 2012|Challenge Me, Encourage Me, Faith, Strengthen Me|12 Comments