I have told you about my Handy Hubby, right?
He is great at all kinds of things I really wouldn’t ever touch with a ten foot pole unless my kids were starving—butchering deer, laying floors, building things (many many things). He is amazing and quick to jump in when it is a physical chore, such as building or working on the garden soils, mulching plants, planting a mini-orchard like we did last year.

But he started doing all those things AFTER I married him.
What was one of the things that made me in awe of him
Â BEFORE we got married?
The man could cook.
And bake.
And he made a mean cup of coffee, which,
incidentally,
I did not drink until we met.
See.
I owe my coffee addiction all to him.
When it comes to the bird we will be eating tomorrow at the Thanksgiving Holiday table,Â  The Handy Hubby will be in charge. He has a special way, a not-so-secret way on preparing it, that he has been doing for years, and today I get to share it with you.
I would post a picture for you of the amazing bird he did last year, but cant find it.Â
SO, you will just have to use your imaginations.
I can post one after the holiday as well so you can get an eye-full of the amazing turkey he gives us each year. It looks way WAYYYYY better than the picture I chose from Photobucket.
He has two secrets really, and those are simple ones. First of all, brine the turkey the night before in a bath of cold water, sea salt,
Â and rosemary leaves in the water.
The next day, before baking, rub said turkey ALL OVER inside and out, with his special turkey rub that he makes out of the following herbs and a couple sticks of fresh butter.
The Handy Hubby’s Not-So-Secret Turkey Rub
in a small bowl place two sticks of fresh butter, and add the following:
1 Tbs sea salt,
1 tsp rubbed sage
1 tsp thyme leaves
1 tsp mild chili powder
1 tsp crushed marjoram
1 tsp tarragon, crushed
1 tsp powdered, dried celery
1 tsp powdered and dried onion
Mix all ingredients really well, and thoroughly cover the turkey, inside and out, even rubbing some under the skin onto the meat as much as possible. Immediately discard anything that is left and wash and sanitize the bowl. Tent the turkey with foil and place in a 350* oven to roast according to the directions given on the bird for time amounts. Baste turkey frequently throughout the cooking time, and remove foil the last 30 minutes to brown turkey well all over and crisp it up.
Really, it tastes amazing, and just as good as it sounds.
Next lets talk about how I do my stuffing each year around here. A long time ago, in one of the bakeries I worked in as a specialty baker, I watched the baker (with many years experience) get prepared for this holiday by baking loaves upon loaves of fresh bread loaded with spices. Seriously, the bakery smelled heavenly, and until then, I had never put two and two together in how easy it is to make your own stuffing. Honestly, at that point in time I am not quite sure I associated stuffing with anything other than those little red boxes loaded with bread crumbs, preservatives, and that itty bitty packet of seasonings. When I realized a person could bake the bread with the seasonings IN IT, then dice the bread when cool, and dry it, thereby making your very own stuffing bread, I was hooked. And I have been doing it ever since. The recipe is simple: 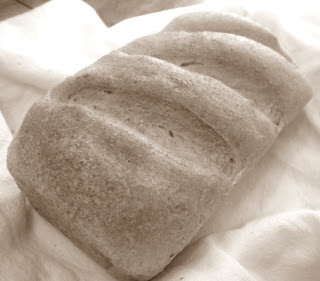 Stuffing Bread Recipe:
6 cups freshly ground Whole Wheat flour
(as always, I use my WonderMill from the Grain Mill Wagon)
2 cups standard bread flour
2 TBS of yeast
2 tsp of sea salt
3/4 cup dark brown sugar
3 eggs
1 cup shortening or butter
2 1/2 cups warm water
Take the water and the yeast and combine, letting them proof for five minutes. Add the shortening or butter, and the sugar, then mix in well and let sit for another 2-3 minutes to boost the yeast. Add the eggs, then begin to beat in the flours. 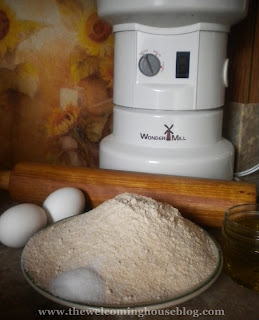 To this bread dough, which should be relatively sticky and wet at first add the following herbs, crushed:
3 tsp oregano
3 tsp basil
3 tsp sage
2 tsp thyme, powdered if possible
2 tsp marjoram
2 tsp crushed parsley flakes
2 tsp garlic powder
2 tsp onion powder
the salt listed above in the recipe
This will make a very strong smelling bread dough.
You will need to add the remaining flour in by hand at the end unless you have a large stand mixer. I do this by keeping one cup of the lighter flour on hand on the counter and finishing out the dough by turning it onto the floured counter and kneading.
Let rise until double, then punch down and form into loaves.
Let rise until double again and bake for 25-30 minutes at 350*.
This bread smells heavenly while cooking.
Once it is cooked, let cool completely. Slice, then dice up each piece.
Â Lay on a cookie sheet and dry in your oven at a low temp,
or quickly run through your dehydrator.
To use, just toss with a little water, and salt or any extra seasonings, and make into stuffing. We add a couple TBS of butter, add hot boiling water to it, cover the glass bowl with a plate, and have almost “instant” stuffing in about ten minutes. Chicken broth makes it even richer.
Which leads me into my last recipe for the day:
The Welcoming House’s Sausage Cranberry stuffing
The combination of flavors in this stuffing is to die for, and most guests go back for seconds and thirds when this is placed on the table. Family is a given, I just have to keep the kids focused on sharing is all. 🙂
Take 6-8 cups of stuffing bread cubes (see recipe above), and place in a large bowl.
In a large frying pan, place a single Lb. of bulk pork sausage and cook until no longer pink. Once it is cooked add the following to the pan:
2 onions, diced,
4 stalks of celery, diced,
4 cups of water
1 tsp salt
Let this simmer until the onion is translucent. Take off heat and immediately add to the stuffing cubes. To the bowl add 2 cups cranberry sauce, already prepared (I make my own with cranberries, sugar and oranges, but the canned stuff works great as well). Mix well, spoon into a greased dish and bake for 40-60 minutes in a 350* oven until well browned around the edges and piping hot in the middle.
This recipe does a great job of combining many of the tastes we associate with Thanksgiving into one dish, and it is even better if you add spicy hot Pork sausage into it (if you like a little kick like I do, but my family doesnt.). This is a wonderful holiday dish to share as well, so hang onto this recipe!
What are some of the other simple recipes we will be having on the table?
Green Bean Casserole
Â garlic Mashed potatoes
Grandma June’s Pistachio Salad
Auntie Ruth’s Sweet yams
Broccoli cheese Bake from my mom
breads
pies
turkey, and the above. 🙂
What are my words for today, this final day before thanksgiving?
Salvation
Abundance
Peace
plenty
prayers
stuffing
simple
Many blessings to you and yours,
Happy HAPPY Thanksgiving,
Heather 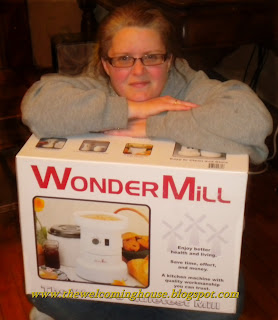